Yesterday morning was rainy when we went down to breakfast, but many things in Gothenburg are closed on Sundays so we decided to stick to our original plan: We rode the tram (light rail) to the coast, then got on a ferry and rode through the southern archipelago. The ferry dropped us off on one of the inhabited islands for about an hour, so we romped around the cottages and had coffee at a cafe by the marina before heading back to the city. It was incredibly windy, but the only rain we had was during our ride home. I think this was my favorite thing yet. Dinner was with Steve and his colleagues. We were the only people in the restaurant, and in general there weren’t many people walking around town. People seem to stay home on Sundays.

Monday Steve was at the office, meeting with the Swedes, so I’m on my own. I walked to Haga, an artists’ community, but I think they take Monday off so I didn’t find much. So then I walked back through the park and past the the Fiskekorken (“fish church” – pictured), which was built for the fish market with Gothic arches for interior openness, hence the nickname. Then I went shopping along the avenyn until I got tired of ducking into stores and cafes to avoid the rain. Did some website work (check out the new jewelry!) and then caught up with Steve & Co. for dinner at an Indian restaurant – so good and remarkably inexpensive.

While we’re gone, Riley is staying at Camp Kenn. He sent me an email today saying that she has taken over his place, but still allows him to stop by to take a shower or sleep on the edge of his bed. Apparently Riley and Tropical Storm Ernesto didn’t get along; Riley thinks she’s made of sugar and doesn’t like the rain at all. 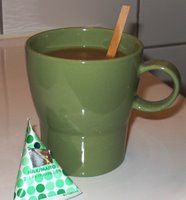 Speaking of sugar, one thing I really like about Sweden is the variety of offerings for sweetening coffee & tea. I have seen granular white, white cubes pre-wrapped in pairs, granular brown, lumps of brown, rock sugar (crystals 1-2cm across, supposedly flavored with vanilla), honey, spun honey… In our hotel room we have a hot pot with a sampling of tea bags, cube packets, and milk in funny triangular-shaped packages that you sometimes see sour cream come in.

Today Steve and I checked out the Kronhuset market, where artisans sell their wares: fiber arts, a blacksmith, woodturners, ceramic artists, a

glassblowing studio, and several jewelry artists with koollookingen* designs. We walked the Avenyn, which is similar to Paris’ Champs-Elysees and Boston’s Back Bay with a wide street lined with shops and restaurants with outdoor seating. We sipped coffee and people-watched at a cafe, checked out the local bead store, walked along the main canal, and had a delicious steak dinner. I am not a big fan of white fish, so I was a little nervous about what I’d eat here in the lan 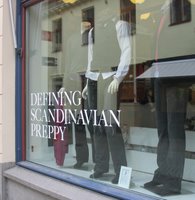 d of fisk. So far what we’ve had is not that different from what we see back home, and all of it has been good.

*I’ve been amusing myself by inventing Swede-lish words. A lot of Swedish words are similar to English or French ones if you say them out loud. It’s like playing Mad Gab, where it looks like gibberish until you say it out loud (and then giggle). I always 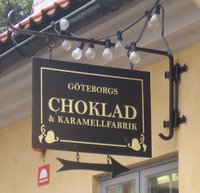 thought it was funny how certain product names at Ikea looked like their English counterparts. Some don’t, though. I saw a rack of skimpy tank tops on the sidewalk with a sign saying Slut. Duh. But then I saw it again in a kitchenwares shop (eerily reminiscent of Crate & Barrel) and learned that it means “sale.”

The more shopping I do, the more I realize how authentic Ikea actually is. I’ve seen store after store of the same style of stuff. And there are votive jars with tea-light candles everywhere, so now I understand why Ikea sells them in bags of 100. And lingonberries are just as prolific, especially in sauce similar to cranberry sauce. Swedes put this on little crepe-like pancakes, and it is available in the Swedish market section of Ikea. Okay, enough about Ikea! 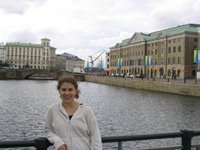 My husband works for a Swedish company, so I’m along on his trip to the home office in Gothenburg (Göteborg), jah. For those of you unfamiliar with Swedish geography, the country is shaped like a sausage and is located between its Scandanavian neighbors Norway and Finland. Most of the action happens in the lower third of the country along the Baltic Sea. Stockholm is on the eastern coast and Gothenburg, the second largest city, is on the western coast.

After taking the train to Newark Airport, spending a short night on a Lufthansa flight (where everyone gets 2 meals, metal utensils, a blanket, & pillow) and a brief layover in Germany, we landed in the home of Saab, Volvo, and gummy fish. 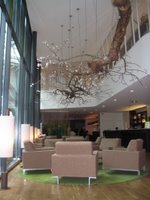 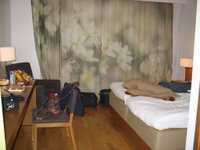 Walking into our hotel room was like walking into an IKEA showroom: hardwood floors, tuxedo sofa, drum shades, curtains in lieu of closet doors, and parsons tables. Classic Swedish minimalism with a touch of nature (flower photo curtain, fake apple blossoms in the lobby). The bathroom has heated tile floors and towel bars to stave off the winter chill.

This afternoon we took a short nap to recharge a little, and then walked around the main shopping district in Gothenburg. Red tile roofs like in Italy, Dutch-designed canals, brick sidewalks, and outdoor cafés everywhere. As with many modern cities, there is a blending of old and new architecture; our contemporary steel and glass hotel is juxtaposed against the old brick arches of Central Station. The weather is in the 60s and overcast, but I’ve been jonesing for fall so this is perfect.

Quotes for the day:
“How’s your teriyaki? It’s not very Swiss for our first meal here; at least they serve quiche like this at Ikea.” (Swedish… Swiss… same difference!)
“Cool, they post the weather report in the elevator. Too bad it’s for January.” (They write the date month/day here so today it’s 1/9.)
“I’m not going to Burger King.” “It’s a Sweden Burger King; that’s totally different.”

On Saturday Steve and I visited the Reading Terminal Market in Philly where one can find produce, baked goods, ice cream, and ethnic food from falafel to wontons. We had southern food at Delilah’s. 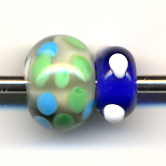 Then we finished setting up the exhaust hood and kiln in our lampwork studio, and each made a bead to be sure we hadn’t forgotten how. I noticed that it is nice and cool in the basement even on the hottest of days, so hopefully I’ll work on the torch a lot this summer. What else am I up to? Class stuff, mostly. Learning new techniques to teach my students, putting together a class sample board for Sparkles, writing up handouts for new techniques, teaching local kids at the library…

Yesterday we braved the rain for Taste of Wilmington to sample food from local restaurants and caterers. Highlights were one of the most delicious crabcakes ever (backfin meat with a minimal amount of filler), an oh-so-tender prime rib sandwich, and chocolate fondue from the Melting Pot. I saved that for the ride home since it was hard to eat while holding an umbrella. They only give you 4 things to dunk in the cup of chocolate, so instead of just drinking the rest I held out and dunked my Swedish ginger cookies in it at home.

Riley is going stir-crazy in all this rain! She needs a jog big-time, but alas I am made of sugar and do not run in the rain. My garden, on the other hand, is doing really well. I think we have a tomato plant volunteer in between shrubs in the front of our yard. The real vegetable garden is at my neighbor’s house in the back. He bought the planters and we bought the plants & potting soil, and we already have an abundance of basil and cilantro. We’re getting closer to having our own cucumbers, zucchini, yellow squash, peppers, and tomatoes.

We live in a 140-some-year-old house, the third floor of which is my studio. The main part of the house has central heat and air, but there is no ductwork in the studio to keep the temperature regulated. Add to this the huge skylights and small layer of insulation between the ceiling and roof, and my studio turns into a sauna in the summertime and a walk-in fridge in the winter. We considered installing a window air conditioner, but the lone vertical window is too small to accommodate one. After moving my work area to a card table in the foyer for the summer and browsing online for a portable A/C unit, I happened upon a solution: a through-the-wall air conditioner/heater. Steve and I are all about DIY home repair, but something about cutting a hole in the side of the house and the resulting exterior caulking job 3 floors off the ground was a little too daunting, so I’ve called to get estimates from professionals. 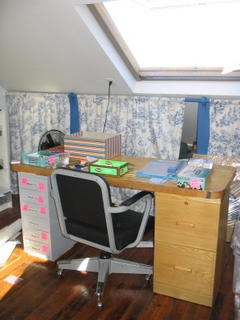 Meanwhile, during the cooler weather I’ve begun to move my mess back up to the studio. I even have a new work surface! Our friend Mitch is fixing up a house and gave us the old butcher block counter from the kitchen. Pair that with an orphan file cabinet under one end and a new Ikea drawer unit under the other end and now I’ve got another great new spot to work. The piece de la resistance is that I took my handy router and cut long grooves in the surface for a built-in design board.